Of all my past LCC travels in Japan, Scoot were my best experience: staff were friendly and efficient, everything ran smoothly and to schedule. They even upgraded me to their "business class" and carried my bicycle for a very reasonable price. I wish I could promise everyone would have the same experience, but in reality I just lucked in that day.

It's All About the Cancellations

Most LCCs make most of their profits from customers who never fly, but for some (like Jetstar) that's taking a good gamble on the fact that a small but significant percentage of travellers will book the cheapest non-changeable flights and then be unable to travel on the day, as a result of their own choice or circumstances. For Vanilla Air it's overbooking and then denying a few passengers check-in over silly "errors" manufactured by their booking system.  For Scoot, it's cancelling whole flights and keeping the money. It seems like fraud (which it is) but  Singapore-based Scoot gets away with it because it's within their Terms and Conditions (see page 14) which most people don't bother to read.

When flights are "cancelled", customers are given vouchers as "refunds" which can only be used within six months, and don't include extra services like insurance or (see below) luggage. At one point Scoot cancelled an entire planned service to Australia, so the customers who lost their flights and their money were given vouchers for an airline which no longer even flew to their country. With hundreds of people per flight, and several per week, a back-of-the-envelope calculation suggests that Scoot made hundreds of thousands of dollars off reservations for "flights" which never existed.

Some customers were able to show that the service wasn't provided and cancel the charge on their credit card with their banks, however Scoot left it long enough that most people, who booked the "cheap fares" well in advance, had passed the three-month period in which it's easiest to challenge or cancel credit card charges.

The most hilarious case was when Scoot cancelled flights in order to maintain their planes. Some customers were apparently given the option of another flight within seven days (who has that much spare time in their travel?) and everyone else got their "refund" as "vouchers". Scoot's apology and explanation is shown below. I suppose, on the upside, at least they maintain their planes. 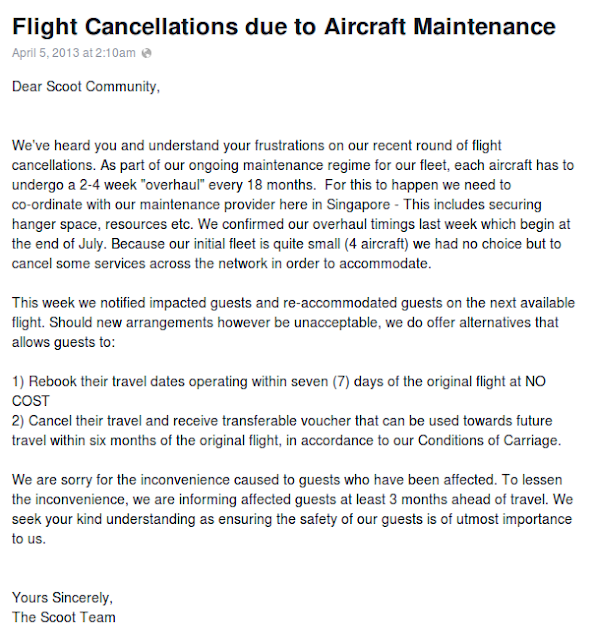 Is it Worth It?

I don't recommend LCCs, and avoid them at all costs, but I draw the line between companies which will refund money when they cancel a flight (such as Jetstar) and those which will keep their passengers money, such as Scoot or Air Asia. If I'm going to be left stranded, I at least want my money back!

If I absolutely had to fly Scoot I would probably try to book it a matter of hours before, from the airport, when it seemed that the flight was actually going to depart. But that's no guarantee.

Here's an article from The Australian on what you can expect on Scoot (or Air Asia / Vanilla Air).